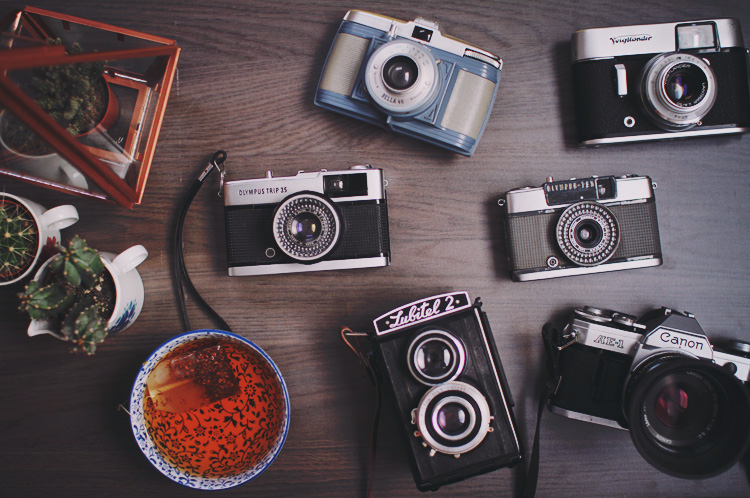 So, here we are, chapter two of the ‘mighty photography book’. The last time I spoke about cameras and also phone cameras, which is gonna be the subject of this post! It may seem a little too much to talk about something that everyone (well, almost everyone) seems to use daily. However, as a fanatic Instagrammer I feel like there are a few things that might be interesting to you! Don’t expect to be enlightened, most of this you’ll probably already know, it’s all basic information. But it just gives you a little more background information about what I do and how I photograph; a little ‘behind the scenes’ so to speak.

P.S. This whole article will be in English only. Feel free to ask me any questions! 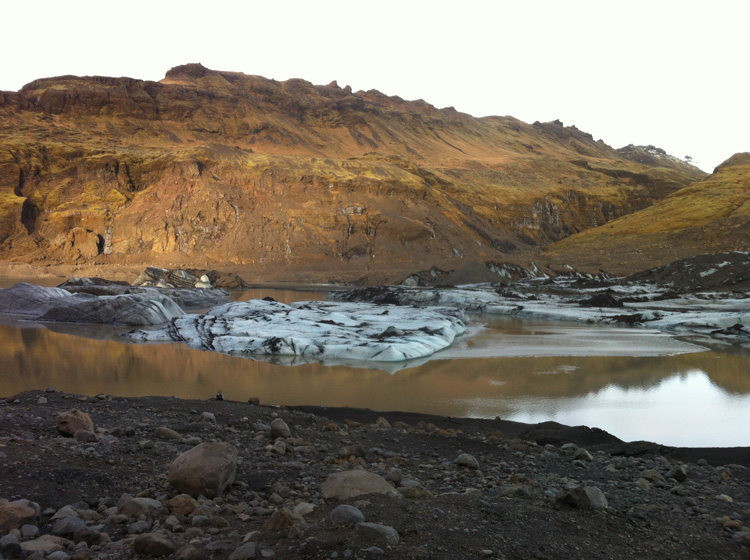 picture taken with the old iPhone 4

Most high end smartphone models have pretty decent cameras, the budget ones sometimes as well. I remember having a compact camera 10 years ago, my old iPhone 4 (the model itself, so the specs as well, is 5 years old) takes better pictures than that camera did! Newer phones take even better pictures, however, having a good phone doesn’t necessarily mean you’ll have a great camera. A camera having many megapixels doesn’t always mean great pictures either. Many people think this, but a phone camera with 20 megapixels is in my opinion just very unnecessary. Unless you want to make huge prints of them, then it might be useful. Then again, the quality won’t be that great for huge prints anyway. What’s more important though is the lens and the sensor size. For example, iPhone cameras usually have about 8 megapixels (the newest 12, I think), which isn’t that much. There are plenty of high end Android models that have about 20. However, iPhone cameras are still one of the very best (in phones) because of the big sensor size and the Sony lenses. This doesn’t mean you should buy an iPhone immediately, but I just wanted to show you that megapixels definitely aren’t everything. Also, many phones won’t use those megapixels, unless you change the settings and then you’ll just end up with huuuuge files. So forget the megapixels, focus more about the sensor size and lens.

If you want to buy a new phone and find the camera really important: look for reviews! Most reviews contain a lot of pictures taken with the phone, or even compare them to other phone cameras, which might be very useful! Right now I’m looking for a new phone, but I have to admit I have no idea anymore which one to choose haha. For now I’ve read great things about iPhones, Sony Xperia Z-line, the newest Samsung Galaxy and even Motorola’s Moto G. But every review I read seems different than the other one, so I have no idea anymore… so… good luck! ;)

Of course there is more to a phone than just a camera, so make sure to check out the rest of it as well.

Light itself is very important in photography in general, but what’s really important is to control the exposure of your camera phone. I’m not sure how it works for every phone, but for my iPhone it’s very simple: if I want the picture to be underexposed a bit, I just put my finger on the lightest part in the picture. This way, the focus will go to the lightest part of the picture and make it sharper and also darker. If a picture is too dark, because for example the light is coming from behind the subject, I’ll focus on the darkest part of the picture, so it will light up the whole picture. You can also lock the exposure by holding the focus point, that way the exposure will be kept that way! When I wrote this article, I still had an old iPhone 4 with old iOS. With the new iOS it’s even easier, just point to a focus point and a little ‘sun’ will pop up, which you can swipe up or down to adjust the exposure.

This might sound like very basic stuff, but a lot of my friends never knew this! And it really, really makes such a big difference! I am not sure how it works on Android models, but make sure to look into that. The right exposure could really make a picture that much better. The base has to be good, filters can do a lot of things, but if it’s blurry or way overexposed to begin with, there’s not much left to be saved…

Also, it’s usually better to underexpose a picture than overexpose it. When it’s overexposed, there will be nothing that can be done to refill the white/light spaces. Where as when it’s underexposed, there’s still a lot of detail in the dark places, which can often be brighten up a bit! Of course, if your picture is just a silhoutte of a building or person, not much can be done. Do remember that if you brighten up a picture with an app, it will create a lot of noise! So again, best thing is to find the right exposure right away. 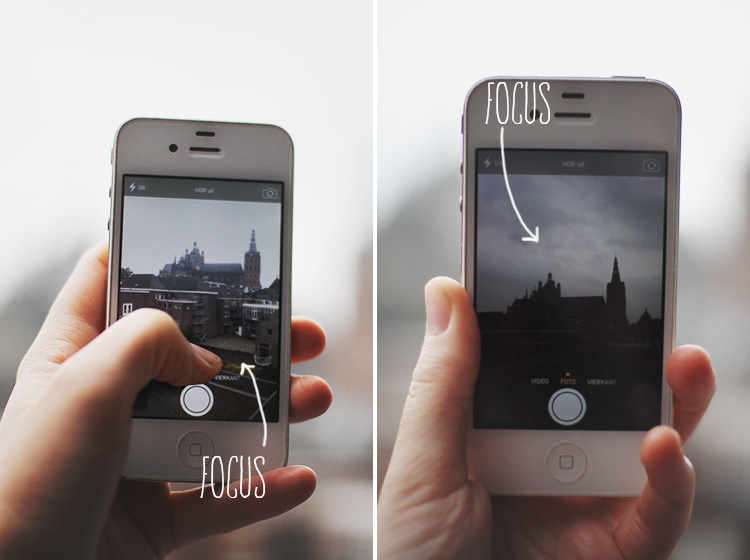 Here you’ll see what a difference the focus point can make. On the right picture the iPhone automatically focusses, which makes the church look like a silhouette and loose all detail. Left is ‘manually’ focused on the darker parts of the picture, which brightens up the picture immediately. 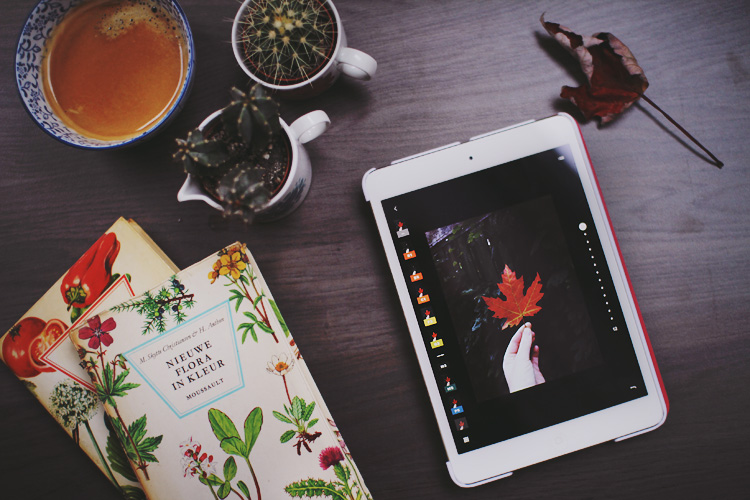 Yesss my favourite part! I have tried many apps but these few still remain my favourite! Just a little detail: even though this post is in English, my phone is in Dutch so the screenshots of the apps are also in Dutch /derp. Sorry for that, I hope it will still give you an idea of how the apps work! 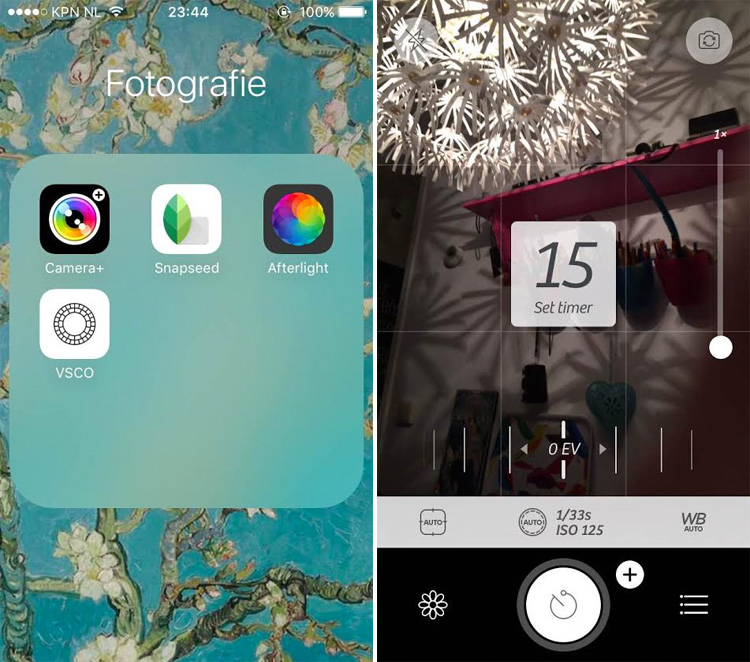 Camera+ is an app that, admittedly, I don’t use often anymore. However, it has one great option that I love to use: the timer function! It allows you to take ‘selfies’ easily, and as you can see, you can also manually change the settings. It’s a simple app that I mostly use for self portraits. 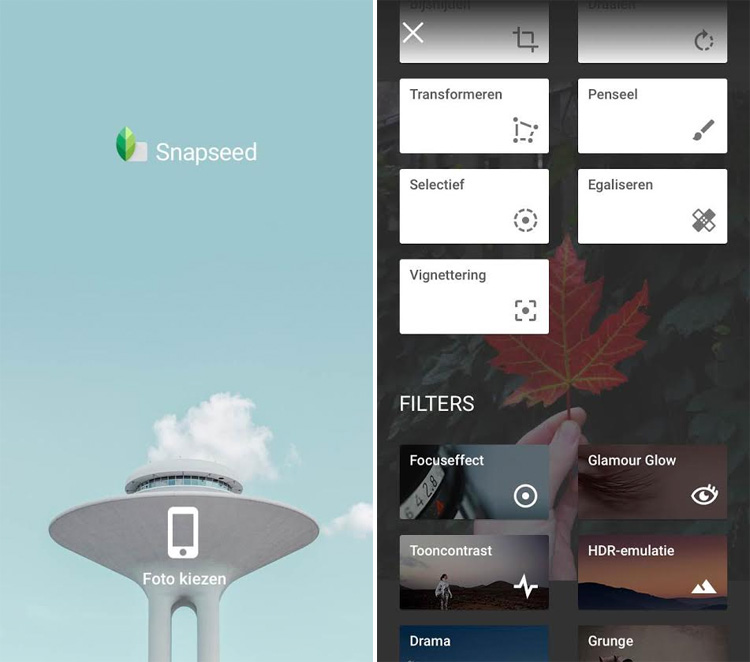 Snapseed is a must have photography app if you ask me! It’s like a mini Photoshop and it offers much more than just filters. You can manually edit all kinds of things, or just focus on one little point and edit that, basically it has a lot more options than I’ve seen in any other app. It’s filters aren’t the best, although I sometimes do use the ‘drama’ filters for some landscape pictures. Again, lots of options though and a great app to edit your picture and make it perfect before you might add a filter on it with another app. Or use no filter at all! 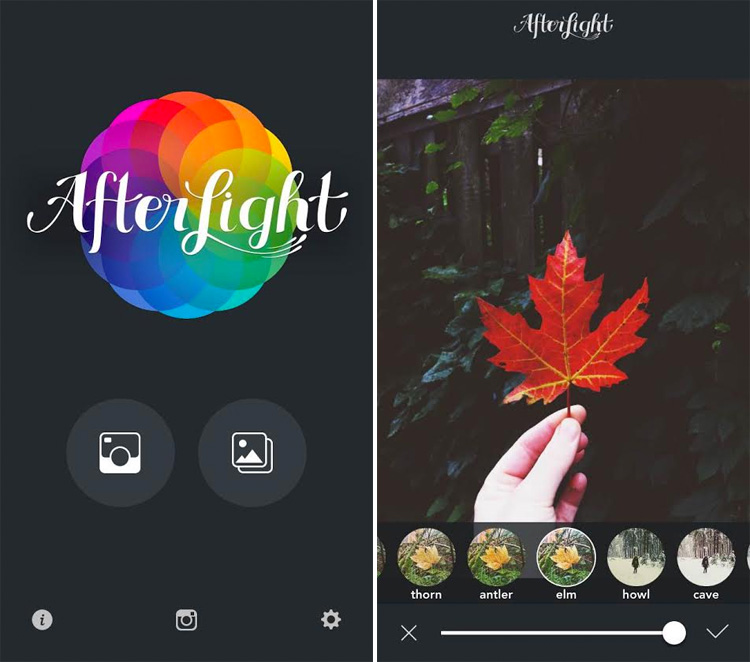 Afterlight has been a long time favourite. I only use it for the filters, but I just really like them. The app is user friendly, it’s easy, and there are plenty of pretty (cheap!) filters to choose from. It’s also made by a photographer I’ve been following on Flickr for a looong time, Simon Filip. 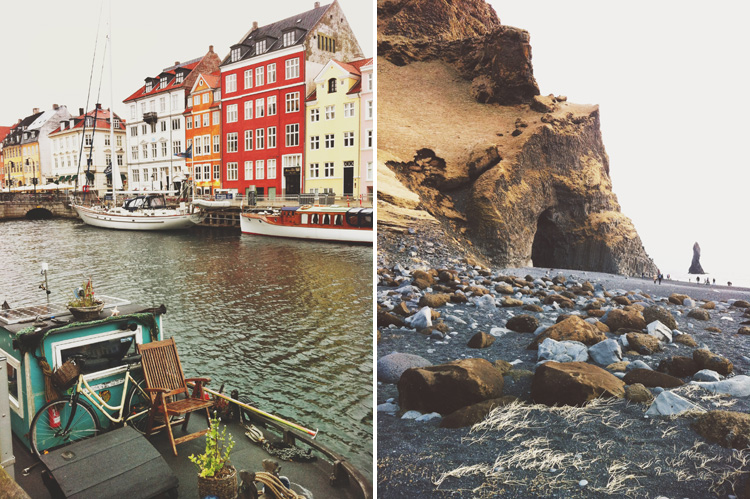 An example of the Afterlight filters. 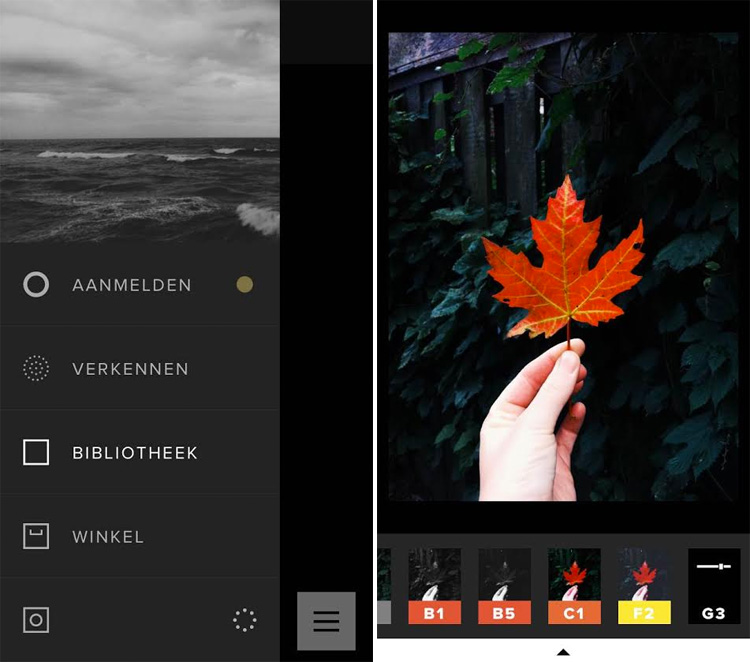 I’ve neglected VSCO CAM for quite a long time, but I’m a big fan now! I find it a little less user friendly than Afterlight, and less filters, but the filters are amazing though! Don’t let the quality of these and the pictures above fool you though, that’s mostly due to the camera (iPhone 4 vs. iPhone 5s/DSLR)

I like my filters bright and saturated, as you can see! 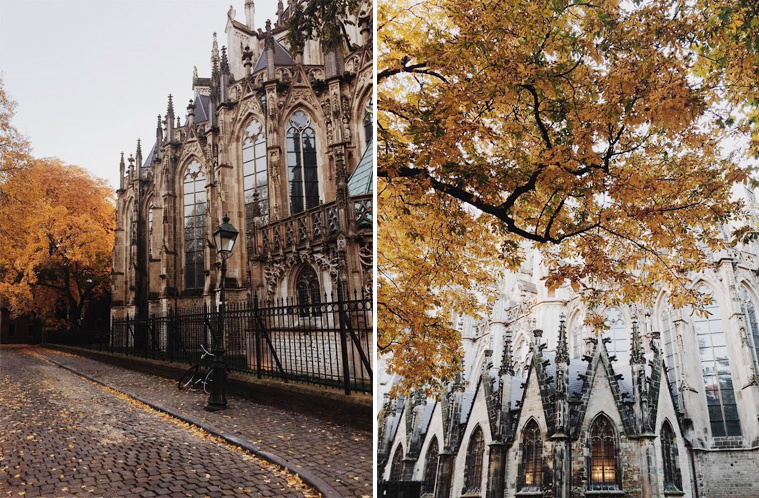 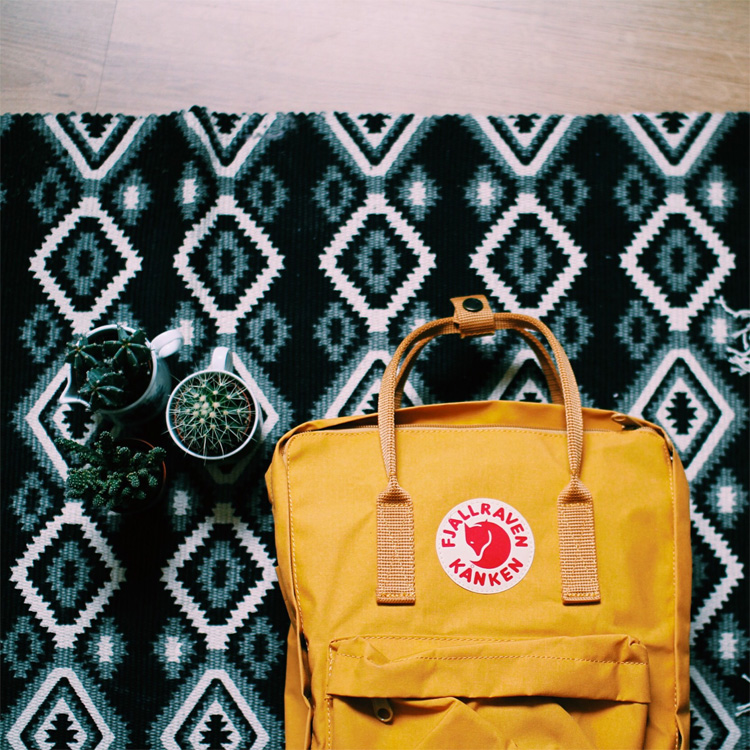 So, that’s that! I hope you enjoyed reading it and, maaaaybe, even learned a teeny tiny bit from it. Who knows? In the next and last update I’ll talk about my specialization: self portraits! This update will take a while, as I will go on holiday first (and hopefully update my selfie techniques ;)). See you next time!